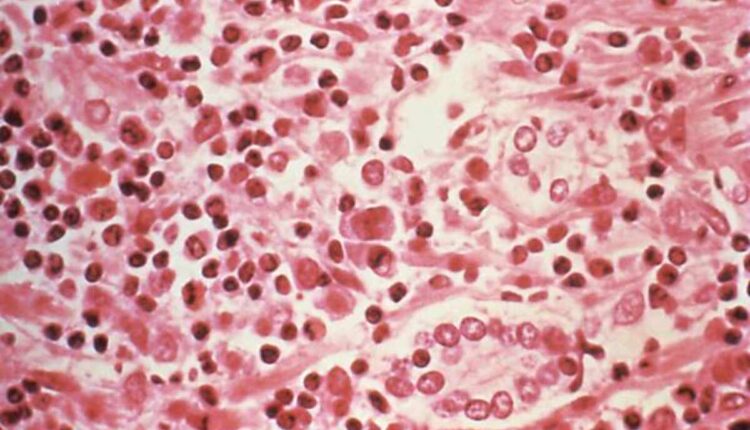 Hantavirus is a group of single-stranded, negative-sense RNA viruses. They are found in the order Bunyavirales and the family Hantaviridae. The members of the Orthohantavirus genus are commonly referred to as hantaviruses.

Hantavirus infections are caused by inhalation of infected particles. These particles infect the cells lining the tiny blood vessels of the lung and cause them to leak, making breathing difficult. The infection can also damage the heart, reducing its ability to pump blood. This leads to low blood pressure, which can result in shock and damage to the heart and other organs. Eventually, the virus can cause organ failure and even death.

People can contract the virus from rodents infected with it. Different strains of the virus cause different disease syndromes. The most common form of the infection is hemorrhagic fever with renal syndrome, which is life-threatening. Hantavirus is found in North and South America, and the predominant animal carrier is the deer mouse. Most cases of the disease occur in rural areas west of the Mississippi River.

There are some promising ways to combat these viruses. For example, antibodies to the virus’s b3 integrin have been identified. Because these antibodies inhibit the virus from entering cells, they have the potential as therapeutic agents. However, further research is needed to understand the pathogenesis of hantavirus infection.

The first symptoms of hantavirus infection are similar to those of the flu. They include fever, headache, muscle aches, nausea, and vomiting. Later, the illness will progress to shortness of breath and breathing difficulties, which may be life-threatening. Ultimately, the virus can lead to death when the infection causes the lungs to swell with fluid.

Hantavirus is spread by rodents and people who come in contact with them. The virus is spread through the air and rodent excretions. Rodents shed hantavirus through urine, feces, and saliva. It is also transmitted through aerosol.

Hantavirus was first detected in the Americas in Recife, Pernambuco, Brazil. Later, the disease spread to the US and was linked to domestic rats in Baltimore. Molecular evidence revealed that rats were an essential reservoir of the virus and responsible for many deaths.

The prevention of hantavirus involves avoiding contact with contaminated areas, particularly rodent droppings. It is a contagious disease transmitted by rodents and can live up to two weeks in human droppings. To reduce the risk of exposure, prevent contact with rodent droppings and their excreta, wear a face mask, and control the number of mice in human dwellings.

As soon as possible, wash your hands thoroughly and wear gloves. Always disinfect wet mop surfaces. If you think you have been exposed to the hantavirus, seek medical attention right away. The symptoms of hantavirus are similar to those of influenza and are common in children and the elderly.

Humans can contract the virus from deer mice, which are endemic in parts of the world. The disease has been linked to an unusual cluster of deaths in the southwestern United States. The fatalities were characterized by a febrile prodrome followed by acute respiratory failure and shock. The CDC and Indian Health Service confirmed that a rodent caused the affectionately; the virus is not fatal for humans but is still a serious public health threat.

Dry Cough Can Be a Symptom of GERD

Kidney Failure – How to Cope With Dialysis Or a Kidney Transplant