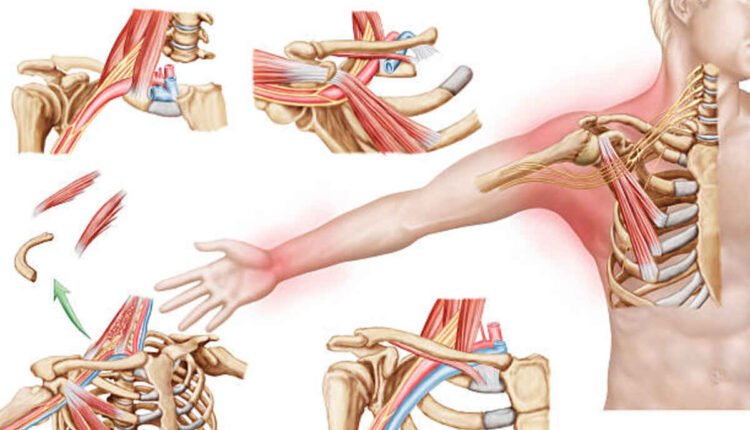 Thoracic outlet syndrome (TOS) is a common condition that affects 8% of the population. It is three to four times more common in women than in men. Females tend to have less-developed muscles and a narrower thoracic outlet. Females also have a lower sternum and greater angle between scalene muscles than males. Symptoms of TOS can range from mild discomfort to limb-threatening complications.

The classic thoracic outlet syndrome symptoms are neck and arm pain. They may also include a tingling or burning sensation. Patients may also notice a weakness in the hand and a reduced range of motion. In some cases, patients may notice a change in color or swelling in the arm. In severe cases, muscle atrophy and wasting may result. Ultimately, these symptoms can lead to a range of other problems.

Thoracic outlet syndrome is caused by pressure on the blood vessels and nerves in the chest and arm. Several factors can cause this condition, including an extra first rib or a fractured clavicle. Another possible cause is weak shoulder muscles that allow the collarbone to slip forward. Other risk factors include obesity, repetitive overhead movements, or accidents.

The symptoms of thoracic outlet syndrome may occur at any age and can be caused by trauma or poor posture. For example, some people develop the condition when they lift heavy objects or sleep with one arm extended. Other risks include carrying a heavy bag or carrying heavy objects. In severe cases, the patient may need to see a doctor. However, this condition is more challenging to diagnose than other shoulder disorders.

Typical symptoms of thoracic outlet syndrome include neck pain and upper extremity pain. This pain is caused by a brachial plexus compression, a network of nerves that extends from the spine through the neck and into the arm. People participating in sports or activities involving repetitive overhead arm movements are more likely to develop this disorder.

The symptoms of thoracic outlet syndrome are often mild but can range from minor pain to limb-threatening complications. Patients usually complain of neck, face, and chest pain. They may also feel a heaviness or have temperature changes. In many cases, patients will also report worsening symptoms when they try to perform activities like lifting heavy objects or performing tasks involving external rotation.

Treatment for thoracic outlet syndrome usually includes physical or occupational therapy and medicines that relieve pain. However, if non-surgical treatments fail to improve your symptoms, you may need surgery to improve the space between the vertebrae and create more space for the nerves and blood vessels. This surgery is generally performed as an outpatient procedure.

Treatment for thoracic outlet syndrome depends on the condition’s cause and how severe it is. The first step is to evaluate the cause of TOS with physical examinations, x-rays, and nerve conduction studies. After determining the exact cause, conservative treatments may be used to relieve symptoms and facilitate a return to work. However, doctors must conduct higher-quality studies to compare conservative treatment with surgery.

A thoracic outlet syndrome is a group of disorders affecting the lower neck. These disorders are caused by brachial plexus compression, a network of nerves extending from the spine to the arm. This syndrome tends to affect people who perform repetitive movements with their arms or participate in sports requiring overhead arm movements.

Thoracic outlet syndrome is caused by a compression of nerves and blood vessels in the thoracic area. It can cause pain in the shoulder and neck and sometimes numbness in the fingers. Many people risk developing this condition, including those who lift heavy objects or have poor posture. Physical therapy is commonly used to treat acute or moderate cases of this disorder, while doctors may recommend surgery if there are complications.

Although the condition affects only 8% of the population, women are four times more likely than men to develop this condition. It is often misdiagnosed and is challenging to treat. It has been around for over two centuries and is the most common peripheral nerve compression in the upper extremity. In 1821, Sir Ashley Cooper described it. Later, Richard Holmes Coote removed cervical ribs to treat arterial TOS.

If you suspect that you might have TOS, visit a doctor immediately. Physical therapy can help stretch and strengthen the muscles in the shoulder area. It can also help prevent relapses. A doctor may order an x-ray to check for extra ribs to confirm the condition. An ultrasound can also help detect vascular issues that may cause thoracic outlet syndrome. Finally, a computerized tomography (CT) scan can provide cross-sectional images of the body.

What Does HBO Max Have to Offer?